What Are Some Of The Most Expensive Cocktails?

We’ve all been there; you’re at the bar, the music’s good, the company better, and the next thing you know the bar tab arrives with more zeros than you’ve seen since you failed calculus. Whatever the damage was that night, be glad that you were not drinking any of the cocktails on this list, whose price tags range from “ouch” to “I need a second mortgage”. 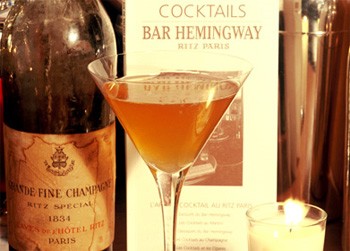 A very expensive version of the cocktail they invented at this very bar, the Ritz Sidecar is a blend of Cointreau, cognac and lemon juice. If you are wondering why it costs so much, the answer is in the cognac. The Bar Hemingway uses an extremely rare vintage, an 1830 Ritz Reserve that predates the cataclysmic destruction of many of France’s greatest vineyards. Only a few bottles now remain, and those with a passion for liquid history will happily pay the price to taste a bygone era. 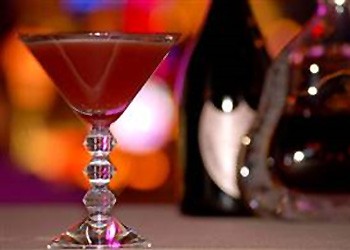 What happens in Vegas is supposed to stay in Vegas,  but if you put one of these on your credit card, you might have some explaining to do when you get home. A supposedly sublime mixture of Hennessy Richard, Dom Perignon Rosé 1996, Chambord Liqueur Royale De France, this drink is served up with the juice of half a lime, a splash of cranberry juice and an orange twist. If the expensive ingredients aren’t enough of a reason to indulge, there’s a memento in it for you. The drink is presented in a Baccarat crystal cocktail glass that you get to take with you, a reminder of the night you spent more on your drink than most folks do on their rent. 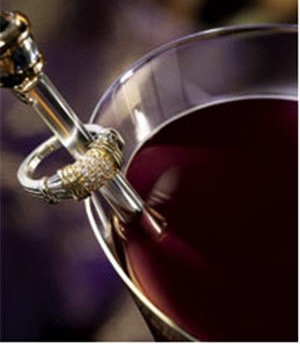 Served at the Capital Grille chain of restaurants, these martinis are served with love, luxury and a dash of the warm fuzzies. Each location has its own special mix and  its own custom designed piece of Lagos jewelery. The Gotham is served in New York and comes with a string of pearls, the High Roller is, unsurprisingly served in Las Vegas, and is delivered with a diamond pavé ring. The Capital Grill donates all the profits of your largess to Share our Strength, a charity involved in ending world hunger.

Since 2006 the Woodford Reserve has been involved in the crafting of the world’s most expensive Mint Julep. What else would you serve at the grandest race in the sport of kings, than a prince of a pricey drink?  Each year the components are selected from a different part of the world, and have previously included hand crushed sugar cane from France, Turkish mint, crushed ice from the Arctic Circle, and other premium ingredients.

The drink is served in a sterling silver cup plated in 24-karat gold and comes with a silver straw, reminiscent of the silver spoon most of the folks imbibing in this decadence were born with. 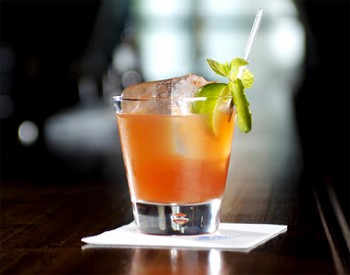 Mai Tai’s in Ireland. Yes, yes, I know, Ireland is not the land of palm trees and pool side cocktails. It is however, the home of the drink that the Guinness Book of World Records proclaimed the most expensive cocktail in the world in 2007, though you’ll note its far from the #1 spot on this list. It does still rank as one of the rarest however, since this Mai Tai is made from 17 year old Wray and Nephew rum, the same run that trader Vic Bergeron used to create the original Mai Tai over sixty years ago. There are only 6 bottles of this rum left in the world, so if you want to taste a bit of rum flavoured history, best head to Belfast before the last drink is gone. 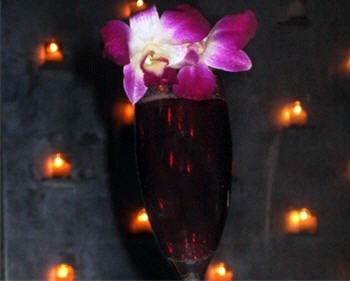 The penultimate girly drink, this pink potion is concocted of L'ésprit de Courvoisier (a $6,000/bottle Cognac), Ruinart champagne and a specially crafted syrup of forest berries, passion fruit, wildflower honey and brown sugar. It is served in a delicately frosted champagne flute and garnished with a single perfect white orchid. Oh yes, one other thing about this very pricey cocktail? It’s served in bed. The Duvet is not just a restaurant, it’s a slumber party for the rich and adventurous. 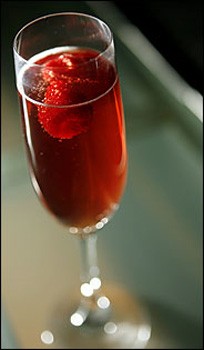 High Limits is what your credit card has to have if you are going to buy a round of this cocktail.  It’s made with 140-year-old Hardy Perfection Cognac, Louis Roederer “Cristal” Rose Champagne, a dash of limited-edition Grand Marnier Cent Cinquantenaire and fresh raspberries.  In the spirit of waste not, want not, after your cocktail is made, the remaining campagne is served to you along in its own flute as bubbly bonus. 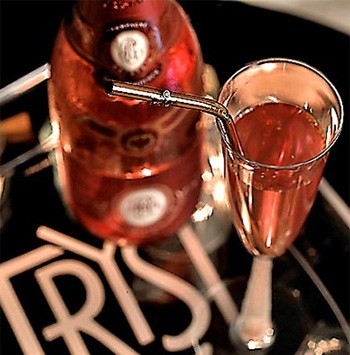 Named for its delicious trio of costly ingredients (get your mind out of the gutter, I know what you were thinking.), this drink is made of Cristal Rosé champagne, Hennessy Ellipse and Grand Marnier Cent-cinquantenaire. To add a certain dazzle, 23 karat gold flakes and liquid gold syrup are used to garnish the glass, and it comes complete with a 9-point diamond studded golden straw to sip up every last drop. 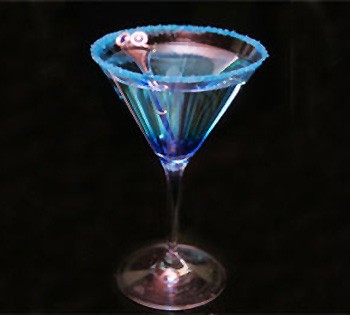 Feeling blue and need something to match your mood? Try a Sapphire Martini at the Foxwood Resort.  Made with Blue Curacao, Bombay Sapphire Gin, a splash of dry vermouth and a glass rimmed with blue sugar, the drink itself is still just a martini. What makes it special? What’s a sapphire martini without sapphires? Every drink comes with a pair of custom made sapphire and diamond earrings set in sterling silver. If that doesn’t cheer you out of your blue funk, nothing will. 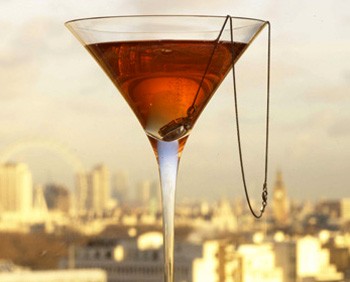 A costly blend of Charles Heidsieck Vintage 2001 champagne, Remy Martin Louis XIII cognac with a dash of Angostura bitters and a sugar cube to sweeten the pain of the price tag.  The standard version comes complete with the drink’s namesake, a .06 carat diamond, though for those trying to truly indulge, a range of gemstones are available up to a final price of $18,000. 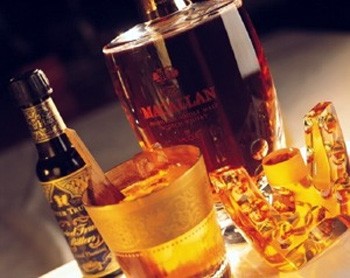 There is no pretense when it comes to this drink, named rather unimaginatively for its price in dirham. Made from Macallan 55 year old single malt whiskey and flavoured with homemade passion fruit sugar, it is served over ice cubes made of water from the Macallan distillery in Scotland, along with an oak stirrer made from a Macallan Cask.

To add to the glamour, the drink is presented in a Baccarat 18-karat gold glass, yours to keep as a momento of your visit to the one of the world’s most expensive hotels and imbibed in one of the most expensive cocktails ever created. 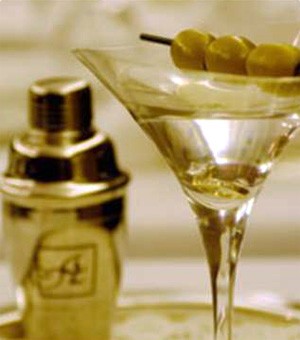 If you are feeling the need to plan your extravagances, then the Algonquin Hotel may just have the drink for you. Preparations include 72 hours of notice and a visit to the hotel’s private jeweler, where you can select the diamond to be dropped into your drink. Unlike many of the cocktails on the menu, the ingredients are neither rare nor exotic, but the splash made by having a dazzling diamond instead of ice in your martini may very well be priceless. 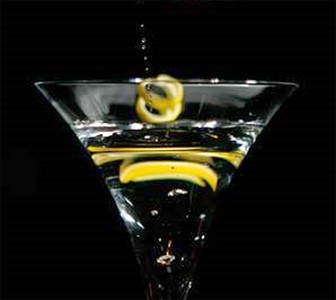 Not to be outdone in the gemstone department, the Ritz-Carlton also has a diamond studded martini on the menu. Chilled Grey Goose Vodka  is served with a hint of fresh lime juice, stirred or shaken to perfection, over a crystal clear one carat diamond. Not even 007 ever had a martini quite like this. 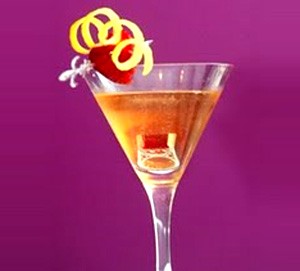 This one is more of a A 50K investment in your lady love’s happiness than a cocktail.

A blend of strawberry and lychee liqueurs are added to rosé champagne with a spritz of lemon juice and served in a chilled champagne flute. The pink cocktail comes complete with a pink cocktail ring, an 18-karat white-gold ring with pink tourmaline and diamond stones lies at the bottom of the glass. 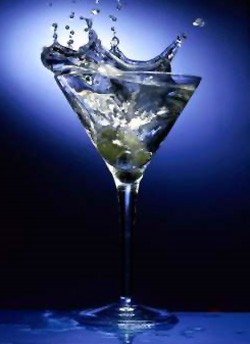 Coming complete with its own security guards, this jaw dropping drink is made with a half bottle of Cristal Rose champagne, a healthy measure of Louis XII cognac, angostura bitters, brown sugar and is dressed up with a few flakes of 24-carat edible gold leaf.

If that doesn’t sound like its worth 70k, you’re right. Flavour only goes so far, and the rest of the sky high price tag is due to the 11 carat, white gold ring that garnishes the glass.

Stewart Pinkerton answered
Champagne cocktails are usually at the top of a bar tariff.