What safe alternatives are there to cling film for cooking hot food?

It's really difficult to suggest anything that's as convenient as cling-film (or Saran wrap) but which is safe to use for food, if only because chemically-based alternatives are much more recent and thus their long-term effects are not yet fully-known. It's even harder to find anything that is safe to use for cooking food, as many of the alternatives which could be used to wrap cold foods would not stand up to heat. A recent development comes in the form of food wraps made from PEVA, which is touted as being safer than plastics containing phthalates and other compounds. However, PEVA itself is a copolymer of ethylene and vinyl acetate. Even cardboard is not as innocuous as it might appear, given that research has indicated that chemicals called DIPNs (disopropyl-napthalenes) can occur in cardboard food packaging, and can subsequently migrate into food.

According to The Daily Mail, The Ministry of Agriculture, Fisheries and Food [MAFF] tested eleven food products whose packaging had shown the highest levels of DIPNs and found that in seven cases the chemicals had partly migrated into the food.

It is not currently thought that DIPNs are a threat to health, but of course many chemicals which were commonly-used in the past and thought to be risk-free, have subsequently been found to have negative effects.

So what alternatives are there, to using cling-film for hot and cold foods? Greaseproof paper (or baking parchment) is an old-fashioned alternative to cling-film, though not as convenient.

It is made by refining paper to a glassine consistency, and then treating it with starches, such as CMC, which is a cellulose gum. 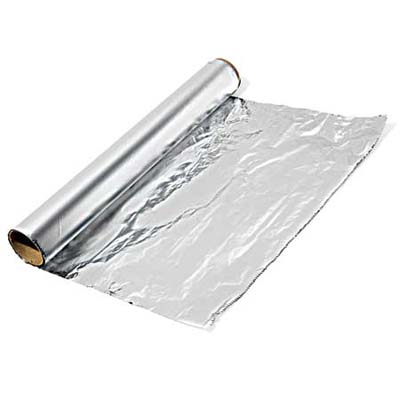 Aluminium foil is another long-established way of wrapping food, both hot and cold, though has also caused some concern amongst health experts - due to its suspected, though as-yet unproven links to Alzheimers Disease.

Various studies have shown that, if certain aluminium compounds are added to drinking water in high concentrations, they can cause adverse effects on reproduction, and also on neurological behaviour and development. (Source: Health Canada.)

(Some scientists have also suggested that there may be a link between the aluminium compounds contained in underarm deodorants and breast cancer, though this has not been proven conclusively.) Polystyrene is also often used to contain hot foods and drinks, but such containers have been shown to contain residual styrene chemicals which can, again, migrate into food.

This is a policy-making approach which takes the view that, in the absence of a scientific consensus about whether something is harmful or not, then there is a duty upon policy-makers to prove that it isn't harmful before approving its use - instead of effectively waiting to find out.

In the EU, a procedure to apply this principle was adopted, and a definition and working strategy was proposed in 2006. This stated that:

Where, following an assessment of available scientific information, there are reasonable grounds for concern for the possibility of adverse effects, but scientific uncertainty persists, provisional risk management measures based on a broad cost/benefit analysis whereby priority will be given to human health and the environment [...] may be adopted, pending further scientific information for a more comprehensive risk assessment, without having to wait until the reality and seriousness of those adverse effects becomes fully-apparent.

However, the above definition was not formally accepted, which is not particularly reassuring.

I would also argue that the phrase cost/benefit analysis is potentially worrying, in that this might easily allow a profit motive to affect and sway decisions which might affect human health.

Perhaps the simplest, but most inconvenient solutions are the best

Because of the various issues mentioned above - and the fact that it seems rare for the "Precautionary Principle" to be adopted in making decisions about chemicals used in manufacturing - I usually try to use the simplest and most old-fashioned alternatives to cling-film, on the basis that these have the longest safety records. Glass is one of the most inert packaging materials, though we do not have a great record in terms of recycling it yet.

However, if possible, I always try to store and prepare food in glass or ceramic containers. I also buy stainless steel pans instead of aluminium ones - and use greaseproof paper or baking parchment to wrap food, most of the time.

Although some of these suggestions are great, covering foods in a microwave oven has limitations.  I cover my food with the basket type drip coffee  (not cone shaped) filters.  I also use paper towels. Coffee filters are pretty pure as far as commercial papers go. There are also specially designed microwave "covers" that can be set over the bowl or plate with the foodstuffs, but I prefer to use paper. I also reuse the paper if it doesn't come into contact with the food.

I hope this suggestion helps.